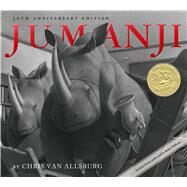 The 30th anniversay edition of Jumanji celebrates this timeless tale as a New York Times Best Illustrated Book and winner of the 1982 Caldecott Medal by the prolific Chris Van Allsburg. Jumanji has amazed and thrilled even the most jaded young reader.When Judy and Peter find a board game in the park, they take it home, hoping to alleviate their boredom. One live lion, an erupting volcano, and a dozen destructive monkeys later, the children are no longer bored. Their jungle adventure game has come to life! Chris Van Allsburg is a master at walking the line between fantasy and reality. His unusually sculptured drawings (familiar to the many devoted fans of the Caldecott-winning The Polar Expressand The Garden of Abdul Gasazi)convey the magical transition of a normal house to an exotic jungle. The 30th anniversary edition will include enriched material--a code to download a Jumanji app, a CD, and a new jacket.