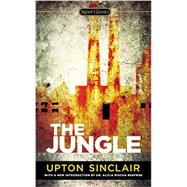 Jurgis Rudkus, a young Lithuanian immigrant in search of a better life, faces instead an epic struggle for survival. His story of factory life in Chicago in the early twentieth century is a saga of barbarous working conditions, crushing poverty, crime, disease, and despair.

Upton Sinclair’s vivid depiction of the horrors of Chicago’s stockyards and slaughterhouses aroused such public indignation that a government investigation was called, eventually resulting in the passage of pure food laws. More than a hundred years later, The Jungle continues to pack the same emotional power it did when it was first published.

Upton Sinclair (1878–1968) was born in Baltimore and began writing dime novels to pay his way through the College of the City of New York. While doing graduate work at Columbia University, he wrote six novels, including King Midas (1901), The Journal of Arthur Stirling (1903), and Manassas (1904). His masterwork, The Jungle (1906), aided the passage of pure food laws and won him wide acclaim. Active throughout his life in socialist causes, he invested the money he made from The Jungle in a Utopian experiment, the Helicon Hall Colony in Englewood, New Jersey. In 1915, he moved to California, where he ran unsuccessfully for public office and waged an antipoverty campaign. Among his later works was Dragon’s Teeth (1942), for which he won a Pulitzer Prize.

Dr. Barry Sears, a widely published scientist and pioneer in the field of medical research, holds twelve U. S. patents in drug delivery and hormonal control technology. He is the author of numerous books, including the #1 New York Times bestseller The Zone.

Dr. Alicia Mischa Renfroe (JD, PhD)  is an Associate Professor of English at Middle Tennessee  State University.  She teaches courses in American literature, Law and Literature, and American Realism and Naturalism. She has published essays on Ernest Hemingway, Jack London, Edith Wharton, Rebecca Harding Davis, William Dean Howells, and Louisa May Alcott.  Her edition of Davis’s A Law Unto Herself is forthcoming from Nebraska University Press’s Legacies of Nineteenth Century Women Writers series.