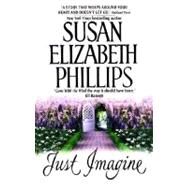 The War Between the States may be over for the rest of the country, but not for Kit Weston. Disguised as a boy, she's come to New York City to kill Baron Cain, the man who stands between her and Risen Glory, the South Carolina home she loves. But unknown to Kit, the Yankee war hero is more than her bitterest enemy-;he's also her guardian. And he'll be a lot harder to kill than she's figured on . . . Believing that Kit's a boy, Cain offers the grubby rapscallion a job in his stable. But he has no idea what he's in for, and it's not long before the hero of Missionary Ridge discovers the truth. His scamp of a stable boy is a strong-willed, violet-eyed beauty who's hell-bent on driving him crazy. Two hard-headed, passionate people . . . Two stubborn opponents with tender souls . . . Sometimes wars of the heart can only be won through the sweetest of surrenders.
Just Imagine

The old street vendor noticed him at once, for the boy was out of place in the crowd of well-dressed stockbrokers and bankers who thronged the streets of lower Manhattan. Cropped black hair that might have held a hint of curl had it been clean stuck out in spikes from beneath the brim of a battered felt hat. A patched shirt unbuttoned at the neck, perhaps in deference to the early July heat, covered narrow, fragile shoulders, while a strap of leather harness held up a pair of greasy, oversized britches. The boy wore black boots that seemed too big for one so small, and he held an oblong bundle in the crook of his arm.

The street vendor leaned against a pushcart filled with trays of pastries and watched the boy shove his way through the crowd, as if it were an enemy to be conquered. The old man saw things others missed, and something about the boy caught his imagination.

"You there, ragazzo. I got a pastry for you. Light as the kiss of an angel. Vieni qui."

The lad jerked up his head, then gazed longingly at the trays of confections the old man's wife made fresh each day. The peddler could almost hear him counting the pennies concealed in the bundle he clutched so protectively. "Come, ragazzo. It is my gift to you." He held up a fat apple tart. "The gift of an old man to a new arrival in this, the most important city in the world."

The boy stuck a defiant thumb into the waistband of his trousers and, approached the cart. "Jes' what makes you reckon I'm a new arrival?"

His accent was as thick as the smell of Carolina jasmine blowing across a cotton field, and the old man concealed a smile. "Perhaps it is only a silly fancy, eh?"

The boy shrugged and kicked at some litter in the gutter. "I'm not sayin' I am, and I'm not sayin' I'm not." He punched a grimy finger in the direction of the tart. "How much you want for that?"

The boy considered this, then gave a short nod and held out his hand. "Thank you kindly."

As he took the bun, two businessmen in frock coats and tall beaver hats came up to the cart. The boy's gaze swept contemptuously over their gold watch fobs, rolled umbrellas, and polished black shoes. "Damn fool Yankees," he muttered.

The men were engaged in conversation and didn't hear, but as soon as they left, the old man frowned. "I think this city of mine is not a good place for you, eh? It has only been three months since the war is over. Our President is dead. Tempers are still high."

The boy settled on the edge of the curb to consume the tart. "I didn't hold much with Mr. Lincoln. I thought he was puerile."

"Puerile? Madre di Dio! What does this word mean?"

"And where does a boy like you learn such a word?"

The boy shaded his eyes from the late-aftemoon sun and squinted at the old man. "Readin' books is my avocation. I learned that particular word from Mr. Ralph Waldo Emerson. I'm an admirer of Mr. Emerson." He began nibbling delicately around the edge of his tart. "'Course, I didn't know he was a Yankee when I started to read his essays. I was mad as skunk piss when I found out. By then it was too late, though. I was already a disciple."

"This Mr. Emerson. What does he say that is so special?"

A fleck of apple clung to the tip of the boy's grimy index finger, and he flicked it with a small pink tongue. "He talks about character and self-reliance. I reckon self-reliance is the most important attribute a person can have, don't you?"

"Faith in God. That is the most important."

"I don't hold much with God anymore, or even Jesus. I used to, but I reckon I've seen too much these last few years. Watched the Yankees slaughter our livestock and burn our barns. Watched them shoot my dog, Fergis. Saw Mrs. Lewis Godfrey Forsythe lose her husband and her son Henry on the same day. My eyes feel old."

The street vendor looked more closely at the boy. A small, heart-shaped face. A nose that tilted up ever so slightly at the end. It seemed somehow a sin that manhood would soon coarsen those delicate features. "How old are you, ragazzo? Eleven? Twelve?"

Wariness crept into eyes that were a surprising shade of deep violet, "Old enough, I guess."

"What about your parents?"

"My mother died when I was born. My daddy died at Shiloh three years ago."

"And you, ragazzo? Why have you come here to my city of New York?"

The boy popped the last bit of tart into his mouth, tucked the bundle back under his arm, and stood. "I've got to protect what's mine. Thank you kindly for that tart. It's been a real pleasure makin' your acquaintance." He began to walk away, then hesitated. "And just so you know...I'm not a boy. And my name's Kit."

As Kit made her way uptown toward Washington Square according to the directions she'd received from a lady on the ferry, she decided she shouldn't have told the old man her name. A person bent on murder shouldn't go around advertising herself. Except it wasn't murder. It was justice, even though the Yankee courts wouldn't see it that way if she got caught. She'd better make certain they never found out that Katharine Louise Weston of Risen Glory Plantation, near what was left of Rutherford, South Carolina, had ever been within spitting distance of their damn city.

Excerpted from Just Imagine by Susan Elizabeth Phillips
All rights reserved by the original copyright owners. Excerpts are provided for display purposes only and may not be reproduced, reprinted or distributed without the written permission of the publisher.