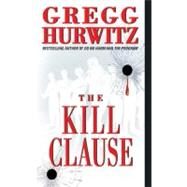 A riveting and explosive novel, The Kill Clause is a brilliantly inventive tour de force by a powerful new master of suspense. Tim Rackley is a dangerous man of honor, a deputy U.S. marshal who is very good at his job-until everything he believes in is shattered by the brutal murder of his own daughter. Betrayed by an imperfect judicial system, Rackley watches helplessly as the killer walks free on a legal technicality. Devastated, furious, and burning with a righteous need for vengeance, he is suddenly forced to explore his own deadly options-a quest that leads him into a shadowy no-man's-land between justice and the law . . . and into the welcoming fold of "the Commission." A vigilante group made up of people like him-relentless streetwise operators who have each lost a loved one to violent crime-the Commission confronts the failings of a system that sets predators loose to hunt again, cleaning up society's "mistakes" covertly, efficiently, and permanently. But as he is dragged deeper into a deadly morass of hidden agendas and murderous justice, Tim Rackley discovers that playing God is an excruciating and fearsome task. When his new secret life starts coming unwound at an alarming speed, he is suddenly caught in the most terrifying struggle he has ever faced-a desperate battle to save his marriage, his career, his life, his soul . . . and everything left that's worth fighting for.
The Kill Clause

When Bear came to tell him that Ginny's body had beenfound raped and dismembered in a creek six miles from hishouse, that her remains had required three biohazard bags to depart the scene, that they were currently sprawled on a pathologist's slab awaiting further probing, Tim's first reaction was not what he would have expected of himself. He went ice cold. There was no grief—grief, he'd learn, takes perspective, recollection, time to unfurl. There was just the news slapping him, dense and jarring like face pain. And, inexplicably, there was embarrassment, though for whom or what, he was not sure. The heel of his hand lowered, searching out the butt of his Smith & Wesson, which of course he wasn't wearing at home at 6:37 in the evening.

To his right Dray fell to her knees, one hand clutching the door frame, fingers curling between the jamb and hinges as if seeking pain. Beneath the razor edge of blond hair, sweat sparkled on the band of her neck.

For an instant everything was frozen. Rain-heavy February air. The draft guttering the seven candles on the pink-and-white-frosted birthday cake that Judy Hartley held poised for revelation in the living room. Bear's boots, distressingly carrying the crime-scene mud, blotting the aggregate porch, the pebbles of which Tim had meticulouslysmoothed on his hands and knees last fall with a square trowel.

Bear said, "Maybe you want to sit down." His eyes held the same guilt and attempted empathy Tim himself had used in countless situations, and Tim hated him unjustly for it. The anger dissolved quickly, leaving behind a dizzying emptiness.

The small gathering in the living room, mirroring the dread emanating from the hushed doorway conversation, gave off a breath-held tension. One of the little girls resumed recounting Harry Potter Quidditch rules and was hushed violently. A mother leaned over and blew out the candles Dray had lit in eager anticipation after the knock onthe front door.

"I thought you were her," Dray said. "I just finished frosting her ... " Her voice wavered hard.

Hearing her, Tim registered an aching remorse that he'd pressed Bear so hard for details right here at the door. His only way to grasp the information had been to try to contain it in questions and facts, to muscle it into pieces small enough for him to digest. Now that he'd taken it in, he had too much of it. But he'd knocked on enough doorshimself—as had Dray—to know that it would have been only a matter of time until they'd known it all anyway. Better to wade in fast and steady and brace against the cold, because the chill wasn't going to leave their bones anytime soon, or maybe ever.

"Andrea," he said. His trembling hand felt the air, searching for her shoulder and not finding it. He couldn't move, couldn't so much as turn his head.

Dray bent her head and started to weep. The sound was one Tim had never heard. Inside, one of Ginny's schoolmates matched her crying—confused, instinctive mimicry.

Bear crouched, both knees cracking, his form broad but huddled on the porch, his nylon raid jacket sweeping low like a cape. The yellow lettering, pale and faded, announced U.S. DEPUTY MARSHAL in case someone cared. "Darlin', hold on there," he said. "Hold on."

His immense hands encircled her biceps—no small feat—and drew her in so her face pressed against his chest. Her hands clawed the air, as if afraid to set down on something for fear of what they might do.

He raised his head sheepishly. "We're gonna need you to... "

The three-foot tires of Bear's chipped-silver Dodge Ram hiccupped over seams on the roadway, shifting the broken-glass dread in Tim's gut.

Composed of twelve square miles of houses and tree-lined streets about fifty miles northwest of downtown L.A., Moorpark was renowned for little more than the fact that it housed the state's largest concentration of law-enforcement residents. It was a low-rent country club for the straight arrows, a post-shift refuge from the streets of the off-kilter city they probed and fought for most of their waking hours. Moorpark radiated an artificial fifties-TV-show feel—no tattoo parlors, no homeless people, no drive-bys. A Secret Service agent, two FBI families, and a postal inspector lived on Tim and Dray's cul-de-sac. Burglary, in Moorpark, was a zero-growth industry.

Bear stared dead ahead at the yellow reflectors lining the center of the road, each one materializing, then floating downward in the dark-ness. He'd forgone his usual slouch, driving attentively, seeming grateful for something to do.

Tim sifted through the mound of remaining questions and tried to find one to serve as a starting point. "Why did you ... why were you there? Not exactly a federal case."

From her hand. A separate entity. Not from her. Through his sickening horror, Tim wondered which of the three bags had carried away her hand, her arm, her torso. One of Bear's knuckles was smudged with dried mud.

" ... the face was tough, I guess. Jesus, Rack, I'm sorry." Bear heaved a sigh that bounced off the dash and came back at Tim in the passenger seat. "Anyways, Bill Fowler was in the handling unit. He firmed the ID—" He stopped, catching himself, then reworded. "He recognized Ginny. Put in a call to me, since he knows how I am withyou and Dray."

"Why didn't he do the advise next of kin? He was Dray's first partner out of the academy. He just ate barbecue at our house last month."

The Kill Clause. Copyright © by Gregg Hurwitz. Reprinted by permission of HarperCollins Publishers, Inc. All rights reserved. Available now wherever books are sold.

Excerpted from The Kill Clause by Gregg Hurwitz
All rights reserved by the original copyright owners. Excerpts are provided for display purposes only and may not be reproduced, reprinted or distributed without the written permission of the publisher.