The Killing of Sister McCormack: The Horrific True Story of the Execution of Sister Irene McCormack 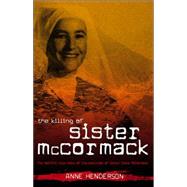 By May 1991, one of the world's most ruthless terrorist groups, the Shining Path, had left 30,000 known dead in its 10-year guerilla war against the Peruvian government. At dusk on May 21, 1991 in the Andean town of Huasahuasi, a silver-haired Australian woman became part of the horrifying death toll. Sister Irene McCormack, a Catholic nun, was executed after a mock trial that saw a young woman terrorist label her a Yankee Imperialist before firing a bullet at point-blank range into the back of her head. Anne Henderson goes beyond the headlines to ask what makes a woman leave the safety of Australia to travel to an impoverished village in rural Peru, and asks, just who exactly was Irene McCormack?
What is included with this book?