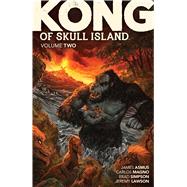 The origin of Kong and the founding of Skull Island—where it all began.

Two fractured and combative civilizations are forced to unite when their island is destroyed. Washing up on the shores of Skull Island, they must defend their people against an endless horde of dinosaurs and monsters. With the help of Kong, lies hope for survival.