Koreans in North America Their Experiences in the Twenty-First Century 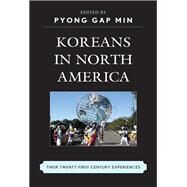