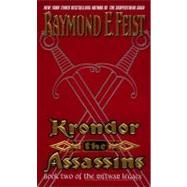 New York Times bestselling author Raymond E. Feist returns us now to a place of unparalleled wonders--a sprawling kingdom coveted by enemies on all sides; a bustling center of commerce and magic, vibrantly alive and eternally in conflict. This is Midkemia, where great heroes are bred, and its glorious center...KrondorPrince Arutha--newly returned from battle--is concerned about a rash of unexplained assassinations that plagues his capital city. And so he commissions his most trusted agent, Squire James--formerly the thief known as "Jimmy the Hand"--to discover the source of the deadly epidemic. The answers seem to lie far beneath the streets in the dank depths of Krondor, where a terrible war rages in secret between two rival criminal gangs: those who call themselves "Mockers" and others in the thrall of a mysterious being known as "The Crawler." But the deeper the Squire delves, the closer he gets to the true nature of the horror that has left untold dead in its wake. And unless James can prevent one last, unthinkable slaying, the nightmare forces of corruption and deceit will destroy his liege and reduce his beloved Krondor to ruins.