The Ladder of Jacob 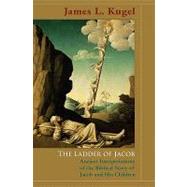 Rife with incest, adultery, rape, and murder, the biblical story of Jacob and his children must have troubled ancient readers. By any standard, this was a family with problems. Jacob's oldest son Reuben is said to have slept with his father's concubine Bilhah. The next two sons, Simeon and Levi, tricked the men of a nearby city into undergoing circumcision, and then murdered all of them as revenge for the rape of their sister. Judah, the fourth son, had sexual relations with his own daughter-in-law. Meanwhile, jealous of their younger sibling Joseph, the brothers conspired to kill him; they later relented and merely sold him into slavery. These stories presented a particular challenge for ancient biblical interpreters. After all, Jacob's sons were the founders of the nation of Israel and ought to have been models of virtue.InThe Ladder of Jacob, renowned biblical scholar James Kugel retraces the steps of ancient biblical interpreters as they struggled with such problems. Kugel reveals how they often fixed on a little detail in the Bible's wording to "deduce" something not openly stated in the narrative. They concluded that Simeon and Levi were justified in killing all the men in a town to avenge the rape of their sister, and that Judah, who slept with his daughter-in-law, was the unfortunate victim of alcoholism.These are among the earliest examples of ancient biblical interpretation (midrash). They are found in retellings of biblical stories that appeared in the closing centuries BCE--in the Book of Jubilees, the Aramaic Levi Document, the Testaments of the Twelve Patriarchs, and other noncanonical works. Through careful analysis of these retellings, Kugel is able to reconstruct how ancient interpreters worked.The Ladder of Jacobis an artful, compelling account of the very beginnings of biblical interpretation.
James L. Kugel is director of the Institute for the History of the Jewish Bible at Bar-Ilan University in Israel, where he also serves as professor of Bible. He is the author of several books, including The Bible as It Was, a finalist for the National Book Critics Circle Award for nonfiction, and How to Read the Bible.