Legends Stories By The Masters of Modern Fantasy 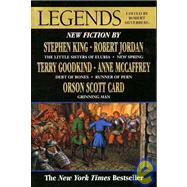 Acclaimed writer and editor Robert Silverberg gathered eleven of the finest writers in Fantasy to contribute to this collection of short novels. Each of the writers was asked to write a new story based on one of his or her most famous series: from Stephen King's opening piece set in his popular Gunslinger universe to Robert Jordan's early look at his famed Wheel of Time saga, these stories are exceptionally well written and universally well told. The authors include King, Jordan, and Silverberg himself, as well as Terry and Lyn Pratchett, Terry Goodkind, Orson Scott Card, Ursula K. Le Guin, Tad Williams, George R.R. Martin, Anne McCaffrey, and Raymond E. Feist.
Robert Silverberg has written more than 160 science fiction novels and nonfiction books. In his spare time he has edited over 60 anthologies. He began his writing career unsuccessfully at the age of 13, when he submitted stories to science fiction magazines and was rejected. He published his first story, entitled "Gorgon Planet," in 1954 while just a sophomore at Columbia University; but in 1956, he won his first Hugo Award, for Most Promising New Author, and he hasn't stopped writing since. Among his standouts: the bestselling Lord Valentine trilogy, set on the planet of Majipoor, and the timeless classics Dying Inside and A Time of Changes. Silverberg has won the prestigious Nebula Award an astonishing five times, and Hugo Awards on four separate occasions. He holds the additional honor of winning these honors in five decades, and he has been nominated for both awards more times that any other writer.
What is included with this book?