, by Jean-Marc Coicaud , Edited and translated by David Ames Curtis 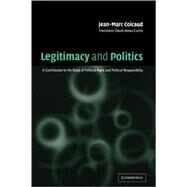 For the past few years, the increase in cases of political corruption, the loss of politicians' credibility, the development of social and political forms of pathology (notably the rise of the extreme right along with exclusionist ideologies), and the role of the State have been at the center of political debates. In one way or another, these problems raise the question of the legitimacy of the established powers. The result is that legitimacy, a key notion of political thought in general, has today become a burning issue. Coicaud examines all these issues and proffers insightful answers to questions such as the connections between morality and politics, how rulers acquire or lose the right to govern, and how one can become the advocate of a theory of political justice that, while establishing limits, respects and even ensures the promotion of plurality within societies.
What is included with this book?