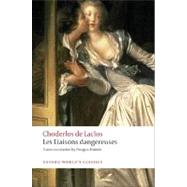 The complex moral ambiguities of seduction and revenge make Les Liaisons dangereuses (1782) one of the most scandalous and controversial novels in European literature. Its prime movers, the Vicomte de Valmont and the Marquise de Merteuil--gifted, wealthy, and bored--form an unholy alliance and turn seduction into a game. And they play this game with such wit and style that it is impossible not to admire them, until they discover mysterious rules that they cannot understand. In the ensuing battle there can be no winners, and the innocent suffer with the guilty. This new translation gives Laclos a modern voice, and readers will be able to judge whether the novel is as "diabolical" and "infamous" as its critics have claimed, or whether it has much to tell us about a world we still inhabit.
Douglas Parmee is Retired Fellow of Queen's College, Cambridge. He is the translator of Nana, Attack on the Mill (Zola) and A Sentimental Journey (Flaubert) for World's Classics. David Coward is Professor of French at the University of Leeds. He is the translator and editor of Maupassant, de Sade, and Dumas in World's Classics.