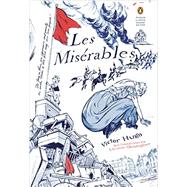 The subject of the world’s longest-running musical and the recent Academy Award–nominated and BAFTA-winning film starring Hugh Jackman and Anne Hathaway, Les Misérables is a genuine literary treasure. Victor Hugo’s tale of injustice, heroism, and love follows the fortunes of Jean Valjean, an escaped convict determined to put his criminal past behind him, and has been a perennial favorite since it first appeared nearly 150 years ago. This exciting new translation with Jillian Tamaki’s brilliant cover art will be a gift both to readers who have already fallen for its timeless story and to new readers discovering it for the first time.
VICTOR HUGO (1802–1885) was one of the most revered French writers of the nineteenth century.
CHRISTINE DONOUGHER is a freelance translator from French and Italian and a recipient of the Scott Moncrieff Translation Prize.
ROBERT TOMBS is a professor of history at St John’s College, Cambridge, England.
JILLIAN TAMAKI is an illustrator and comic artist and teaches at the School of Visual Arts in New York City.