Lessons For Dylan On Life, Love, the Movies, and Me 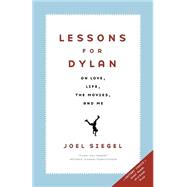 At the age of fifty-seven, movie critic Joel Siegel both became a father for the first time and learned that he had cancer. InLessons for Dylan, Siegel shares all the things he wants his son to knowin case he's not around to tell him. It's a story about a life well-lived and about living life well. It's chock-full of earnest advice, hilarious anecdotes, a Yiddish lexicon, and recollections of everyone from Brad Pitt to the Beatles. Siegel lays out the History of the Jewish People in Four Jokes; offers Dylan manly advice on sex ("ask your mother"), culinary arts, the movies; and of course, offers a few lectures ("Be anything you want to be, but, please God, please don't want to be an actor"). Along the way, Joel teaches Dylan, and readers, a little something about growing up at any age. At times heart-wrenching, at times laugh-out-loud funny, Joel Siegel has crafted an indelible and enduring love letter to his son, and a literary gift to us all.
Joel Siegel graduated from UCLA and has worked as a radio newscaster, Los Angeles Times book reviewer, freelance writer for publications including Rolling Stone and Sports Illustrated, and joke writer for Sen. Robert Kennedy. He has been an entertainment critic for WABC-TV's Eyewitness News since 1976 and for ABC's Good Morning America since 1981 and has won many awards, including five New York Emmy Awards and the Anti-Defamation League of B'nai B'rith Public Service Award. He is also co-founder (with Gene Wilder) and president of Gilda's Club, a non-profit support facility for cancer patients. He resides in New York City.
What is included with this book?