Liberal Beginnings: Making a Republic for the Moderns 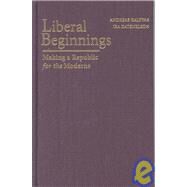 The book examines the origins and development of the modern liberal tradition and explores the relationship between republicanism and liberalism between 1750 and 1830. The authors consider the diverse settings of Scotland, the American colonies, the new United States, and France and examine the writings of six leading thinkers of this period: Adam Smith, Adam Ferguson, James Madison, Thomas Paine, Germaine de Staël, and Benjamin Constant. The book traces the process by which these thinkers transformed and advanced the republican project, both from within and by introducing new elements from without. Without compromising civic principles or abandoning republican language, they came to see that unrevised, the republican tradition could not grapple successfully with the political problems of their time. By investing new meanings, arguments, and justifications into existing republican ideas and political forms, these innovators fashioned a doctrine for a modern republic, the core of which was surprisingly liberal.
What is included with this book?