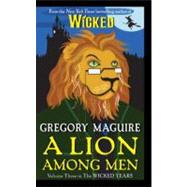 While civil war looms in Oz, Brrr-the Cowardly Lion-surrenders the story of his life to a tetchy oracle named Yackle. Abandoned as a cub, Brrr's path from infancy in the Great Gillikan Forest is no Yellow Brick Road. Seeking to redress an early mistake, he trudges through a swamp of ghosts, becomes implicated in a massacre of trolls, falls in love with a forbidding Cat princess, and avoids a jail sentence by agreeing to serve as a lackey to the war-mongering Emperor of Oz. .A portrait of a would-be survivor and a panoramic glimpse of a world gone shrill with war fever, Gregory Maguire's A Lion Among Men is written with the sympathy and power that have made his books contemporary classics.