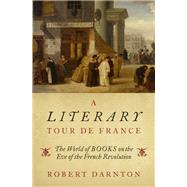 The publishing industry in France in the years before the Revolution was a lively and sometimes rough-and-tumble affair, as publishers and printers scrambled to deal with (and if possible evade) shifting censorship laws and tax regulations, in order to cater to a reading public's appetite for books of all kinds, from the famous Encyclopédie, repository of reason and knowledge, to scandal-mongering libel and pornography. Historian and librarian Robert Darnton uses his exclusive access to a trove of documents-letters and documents from authors, publishers, printers, paper millers, type founders, ink manufacturers, smugglers, wagon drivers, warehousemen, and accountants-involving a publishing house in the Swiss town of Neuchatel to bring this world to life. Like other places on the periphery of France, Switzerland was a hotbed of piracy, carefully monitoring the demand for certain kinds of books and finding ways of fulfilling it. Focusing in particular on the diary of Jean-François
Favarger, a traveling sales rep for a Swiss firm whose 1778 voyage, on horseback and on foot, around France to visit bookstores and renew accounts forms the spine of this story, Darnton reveals not only how the industry worked and which titles were in greatest demand, but the human scale of its operations.

A Literary Tour de France is literally that. Darnton captures the hustle, picaresque comedy, and occasional risk of Favarger's travels in the service of books, and in the process offers an engaging, immersive, and unforgettable narrative of book culture at a critical moment in France's history.

Robert Darnton is Carl H. Pforzheimer University Professor and University Librarian, Emeritu of Harvard University, and is the author of The Great Cat Massacre and other books. His website offers a digital tour of the research that went into the making of this book.
What is included with this book?