Literature and Development in North Africa: The Modernizing Mission 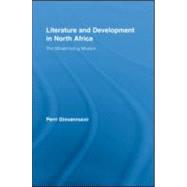 The colonial history of the discourse and practices of contemporary, modern development may be traced in the seminal texts of anti-colonial and postcolonial literature, such as works by Frantz Fanon, Albert Memmi and Jean-Paul Sartre, as well as in the fiction and memoirs of Albert Camus, Lawrence Durrell, Naguib Mahfouz, Nawal El Saadawi, Assia Djebar, Gini Alhadeff, Andre Aciman and Edward Said. The complexities of nativism and nationalism, as responses to Western development, are evident in the works of Camus, Saadawi and Mahfouz, and others who, in the context of the anti-colonial moment of the day, thought deeply about issues of indigenity, sovereignty, and national identity. Ultimately, the North African authors discussed here sought to make an identity, if not also a place, for themselves in a modern East rapidly developing its postcolonial condition.