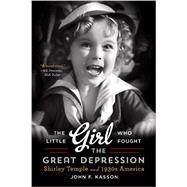 For four consecutive years she was the worlds box-office champion. With her image appearing in periodicals and advertisements roughly twenty times daily, she rivaled FDR and Edward VIII as the most photographed person in the world. Her portrait brightened the homes of countless admirers, among them J. Edgar Hoover, Andy Warhol, and Anne Frank.Distinguished cultural historian John F. Kasson shows how, amid the deprivation and despair of the Great Depression, Shirley Temple radiated optimism and plucky good cheer that lifted the spirits of millions and shaped their collective character for generations to come.
What is included with this book?