The Lives of Guns 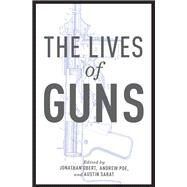 Guns have never been as prevalent in American culture as they are at this moment. Most contemporary conversations on guns either highlight the gun as just a tool used in mass killings or a right to be fiercely defended; eventually, whatever progress these debates foster in the public
conversation tend to halt altogether once the old cliché, "guns don't kill people; people kill people" is trotted out. These gun control and gun violence discussions take the gun as passive object, ignoring the changing effects, and the very agency, that guns may deploy as politicized objects. What
happens if we reset the conversation and admit that guns, and not the people behind them, kill people?

The Lives of Guns offers a new and compelling way of thinking about the role of the gun in our social and political lives. In gathering ideas from law, science studies, sociology, and politics, each chapter turns the stale, standard gun conversations around by investigating the gun as an object with
agency. In approaching guns from a technological perspective, down to the very science of how they are created and how they fire, The Lives of Guns takes up a number of questions, such as: How does the presence of these objects shape civic ideology? What does it mean to develop and care for gun and
gun accessories technology? What do guns mean to those who build them versus those who fight for-and against-them? What could happen when drone technology meets gun technology? In bringing together fresh perspectives from leading lawyers, political scientists, and historians, The Lives of Guns
promises to move the gun debate forward by opening up new ways of thinking about these issues and broadening the scope of these perennial debates.

Jonathan Obert is Assistant Professor of Politics at Amherst College.

Austin Sarat is Associate Dean of the Faculty and William Nelson Cromwell Professor of Jurisprudence and Political Science at Amherst College and Hugo L. Black Visiting Senior Scholar at the University of Alabama School of Law. He is the author or editor of more than 90 books

Section I: The Political Life of Guns

Section II: The Social Life of Guns
Chapter IV: "The Thriving Life of Racialized Weaponry: Violence and Sonic Capacities from the Drone to the Gun"
Heather Hayes
Chapter V: "Dum-Dum Bullets: Constructing and Deconstructing 'The Human'"
Joanna Bourke
Chapter VI: "The Death of the Unarmed Assailant: On Racial Fears, Ambiguous Movement, and the Vulnerability of Armed Police"
Franklin Zimring