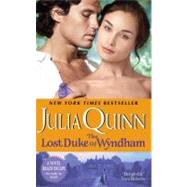 Jack Audley has been a highwayman. A soldier. And he has always been a rogue. What he is not, and never wanted to be, is a peer of the realm, responsible for an ancient heritage and the livelihood of hundreds. But when he is recognized as the long-lost son of the House of Wyndham, his carefree life is over. And if his birth proves to be legitimate, then he will find himself with the one title he never wanted: Duke of Wyndham. Grace Eversleigh has spent the last five years toiling as the companion to the dowager Duchess of Wyndham. It is a thankless job, with very little break from the routine . . . until Jack Audley lands in her life, all rakish smiles and debonair charm. He is not a man who takes no for an answer, and when she is in his arms, she's not a woman who wants to say no. But if he is the true duke, then he is the one man she can never have . . .
What is included with this book?

The Lost Duke of Wyndham

Grace Eversleigh had been the companion to the dowager Duchess of Wyndham for five years, and in that time she had learned several things about her employer, the most pertinent of which was this:

Under her grace's stern, exacting, and haughty exterior did not beat a heart of gold.

Which was not to say that the offending organ was black. Her grace the dowager Duchess of Wyndham could never be called completely evil. Nor was she cruel, spiteful, or even entirely mean-spirited. But Augusta Elizabeth Candida Debenham Cavendish had been born the daughter of a duke, she had married a duke, and then given birth to another. Her sister was now a member of a minor royal family in some central European country whose name Grace could never quite pronounce, and her brother owned most of East Anglia. As far as the dowager was concerned, the world was a stratified place, with a hierarchy as clear as it was rigid.

Wyndhams, and especially Wyndhams who used to be Debenhams, sat firmly at the top.

And as such, the dowager expected certain behavior and deference to be paid. She was rarely kind, she did not tolerate stupidity, and her compliments were never falsely given. (Some might say they were never given at all, but Grace had, precisely twice, borne witness to a curt but honest "well done"—not that anyone believed her when she mentioned it later.)

But the dowager had saved Grace from an impossible situation, and for that she would always possess Grace's gratitude, respect, and most of all, her loyalty. Still, there was no getting around the fact that the dowager was something less than cheerful, and so, as they rode home from the Lincolnshire Dance and Assembly, their elegant and well-sprung coach gliding effortlessly across the midnight-dark roads, Grace could not help but be relieved that her employer was fast asleep.

It had been a lovely night, truly, and Grace knew she should not be so uncharitable. Upon arrival, the dowager had immediately retired to her seat of honor with her cronies, and Grace had not been required to attend to her. Instead, she had danced and laughed with all of her old friends, she had drunk three glasses of punch, she had poked fun at Thomas—always an entertaining endeavor; he was the current duke and certainly needed a bit less obsequiousness in his life. But most of all she had smiled. She had smiled so well and so often that her cheeks hurt.

The pure and unexpected joy of the evening had left her body humming with energy, and she was now perfectly happy to grin into the darkness, listening to the soft snore of the dowager as they made their way home.

Grace closed her eyes, even though she did not think herself sleepy. There was something hypnotic about the motion of the carriage. She was riding backwards —she always did— and the rhythmic clip-clop of the horses' hooves was making her drowsy. It was strange. Her eyes were tired, even though the rest of her was not. But perhaps a nap would not be such a misplaced endeavor—as soon as they returned to Belgrave, she would be required to aid the dowager with—

Grace sat up straight, glancing over at her employer, who, miraculously, had not awakened. What was that sound? Had someone—

This time the carriage lurched, coming to a halt so swiftly that the dowager, who was facing front as usual, was jerked off her seat.

Grace immediately dropped to her knees next to her employer, her arms instinctively coming around her.

"What the devil?" the dowager snapped, but fell silent when she caught Grace's expression.

The dowager's lips pursed tightly, and then she yanked off her emerald necklace and thrust it at Grace. "Hide this," she ordered.

"Me?" Grace practically squeaked, but she shoved the jewels under a cushion all the same. And all she could think was that she would dearly like to smack a little sense into the esteemed Augusta Wyndham, because if she were killed because the dowager was too cheap to hand over her jewels—

The door was wrenched open.

Grace froze, still crouched on the floor next to the dowager. Slowly, she lifted her head to the doorway, but all she could see was the silvery end of a gun, round and menacing, and pointed at her forehead.

"Ladies," came the voice again, and this time it was a bit different, almost polite. The speaker then stepped forward out of the shadows, and with a graceful motion swept his arm in an arc to usher them out. "The pleasure of your company, if you will," he murmured.

Grace felt her eyes dart back and forth—an exercise in futility, to be sure, as there was clearly no avenue of escape. She turned to the dowager, expecting to find her spitting with fury, but instead she had gone white. It was then that Grace realized she was shaking.

The dowager was shaking.

Both of them were.

The highwayman leaned in, one shoulder resting against the door frame. He smiled then—slow and lazy, and with the charm of a rogue. How Grace could see all of that when half of his face was covered with his mask, she did not know, but three things about him were abundantly clear:

And he was dangerously lethal.

"Ma'am," Grace said, giving the dowager a nudge. "I think we should do as he says."

"I do love a sensible woman," he said, and smiled again. Just a quirk this time—one devastating little lift at the corner of his mouth. But his gun remained high, and his charm did little to assuage Grace's fear.

And then he extended his other arm. He extended his arm. As if they were embarking at a house party. As if he were a country gentleman, about to inquire about the weather.

The Lost Duke of Wyndham. Copyright © by Julia Quinn. Reprinted by permission of HarperCollins Publishers, Inc. All rights reserved. Available now wherever books are sold.

Excerpted from The Lost Duke of Wyndham by Julia Quinn
All rights reserved by the original copyright owners. Excerpts are provided for display purposes only and may not be reproduced, reprinted or distributed without the written permission of the publisher.