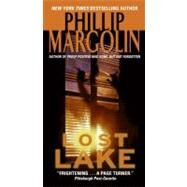 On a summer night in Portland, Oregon, violence erupts at a Little League game -- and attorney Ami Vergano watches in horror as the quiet, gentle artist she recently befriended does the unexpected and unthinkable . . . In a cheap motel room in Washington, D.C., Vanessa Kohler -- ex-mental patient, supermarket tabloid reporter, and estranged daughter of a powerful general running for president -- views a news broadcast of the bizarre incident and believes she's found the only witness to a deadly conspiracy. Caught between a possible madwoman and a confessed mass murderer, between reality and delusion, Ami races to unearth the terrible truth about dark events that may or may never have happened twenty years earlier in a secluded cabin on Lost Lake.
Lost Lake

The organizers of the Portland Spring Art Fair had lucked out. It had beena very wet March in Oregon and the weather seers were predicting rainthrough most of April. But Mother Nature had redecorated in the nickof time, storing away the endless precipitation and gloomy black cloudsfor another day and setting out sunshine and clear blue skies for theweekend of the fair.

Ami Vergano had dressed in a multicolored peasant skirt and awhite blouse with short puffed sleeves to celebrate the pleasantweather. Ami was just over five-four and still had the solid build of thegymnast she'd been until she grew in high school. She kept her brownhair short because it was easy to care for. Her big brown eyes dominatedher face. Circumstances had turned Ami serious, but her wide,bright smile could light up a room.

Ami was delighted at the large crowds that were taking advantage ofthe first sunny days of spring to roam the Park Blocks in search of art.Her booth had attracted people since the fair opened, and three of heroils had sold already. She was putting the money from her most recentsale into her purse when someone spoke.

"I like that. Is it imaginary or did you paint a real scene?"

Ami turned and found a broad-shouldered man admiring one of herlandscapes. His face had the tanned, leathery look of someone whospends a lot of time outdoors. Ami figured him for five-ten and in hismid- to late forties. He was dressed in jeans, moccasins, and a plaidlong-sleeved shirt. His long hair was gathered in a ponytail, and he hada scraggly mustache and goatee. He brought to mind the hippies of thepeace and love generation in the 1960s.

"That's a forest glade not far from my house," Ami said.

"I love the way you've captured the light."

Ami smiled. "Thanks. You have no idea how long I worked to get itjust right."

"Dan Morelli," the man said, offering his hand. "I have the boothnext door. I saw how many people have been going in and out of yoursand decided to see what the fuss was all about."

"Ami Vergano," she said as she took Morelli's hand. It was large andcomforting, like his smile. "What are you showing? I've been so busythat I haven't had a chance to look around yet."

"I build custom-made furniture. Take a peek if you get a chance."

"I will. Are you from around here? I haven't seen you at our showsbefore."

"No place, really. I was an army brat. We moved from town to town.I've been living in Arizona, but it's too dry. I like the woods, the ocean."

"There's not much of that in Arizona."

"No, there's not. Anyway, I heard about the fair and thought I'd seeif I could get a few orders."

"Good. One fellow who stopped by just opened an accounting officeand he wants a desk, bookshelves, and some other stuff. That shouldkeep me busy for a while. Now I just have to find somewhere to stayand a place to work."

Ami hesitated. She didn't know a thing about Morelli, but heseemed nice. She made a snap decision.

"You might be in luck. I have an apartment over my garage that Irent out, and my studio is in a barn behind the house. It has plenty of room for carpentry. There's even a workshop and power tools. A studentwas renting but he had to leave school early because of an illnessin the family, so the apartment is empty."

"I have my own tools, but that does sound just right. Can I drive outafter the fair shuts down and have a look?"

She told him and Morelli smiled shyly. "I can make that." Hestepped out of Ami's booth and looked over at his own. "Got to go.Looks like I have customers. I'd better sell something now that I have topay rent."

Ami laughed and waved. "See you around five."

Morelli ducked out, and Ami wrapped her arms around herself.Finances had been tight since her tenant left. She could use the extramoney. And it would be fun to have another artist around the place.Morelli seemed nice. She hoped it would work out.

Ami Vergano closed the screen door as quietly as she could and stoodon the front porch watching Daniel Morelli teach her ten-year-old sonhow to throw a curveball. They were in the front yard under the agedoak tree that Ami called Methuselah. Morelli was squatting beside Ryanand gently adjusting his fingers on the seams of a badly scuffed hardballthat, along with his mitt, was her son's prize possession. Ryan'sbrow wrinkled as he concentrated on getting the grip right, oblivious ofthe darkness that was descending at the end of a perfect spring day.Morelli was wearing jeans and a black T-shirt advertising a local microbrew.

When he stretched out his arm, his biceps, triceps, and forearmlooked like coiled rope. For someone approaching fifty, Morelli was in goodshape. Ami knew that he ran for miles in the morning because she'd seenhim returning to his apartment lathered in sweat when she was leaving forwork. Once she'd seen him with his shirt off and had been impressed by theetched perfection of his physique. She had also been surprised to see morethan one long scar cutting across his back and stomach.

"That's right," Morelli said, and Ryan grinned with pride. Her sonwas an energetic, gawky towhead who played Little League with a passionand loved anything to do with baseball . . .

Excerpted from Lost Lake by Phillip Margolin
All rights reserved by the original copyright owners. Excerpts are provided for display purposes only and may not be reproduced, reprinted or distributed without the written permission of the publisher.