The Lovelorn Ghost and the Magical Monk 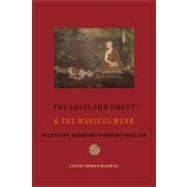 Stories centering on the lovelorn ghost (Mae Nak) and the magical monk (Somdet To) are central to Thai Buddhism. Richly symbolic and emotionally resonant, these characters appeal to every class of follower; metaphorically and rhetorically powerful, they invite constant reimagining across time. Focusing on representations of the ghost and the monk from the late eighteenth century to the present, Justin Thomas McDaniel builds a case for interpreting modern Thai Buddhist practice through the movements of these transformative figures. McDaniel follows embodiments of the ghost and the monk in a variety of genres and media, including biography, film, television, drama, ritual, art, liturgy, and the Internet. Sourcing nuns, monks, laypeople, and royalty, he shows how relations with the ghost and the monk have been instrumental in crafting histories and modernities. McDaniel is especially interested in local conceptions of being "Buddhist" and the formation and transmission of such identities across different venues and technologies. Establishing an individual's "religious repertoire" as a valid category of study, he explores the performance of Buddhist thought and ritual through practices of magic, prognostication, image production, sacred protection, and deity and ghost worship, among other enactments, and clarifies the meaning of multiple cultural configurations. Listening to popular Thai Buddhist ghost stories, visiting crowded shrines and temples, McDaniel finds that concepts of attachment, love, wealth, beauty, graciousness, security, nationalism, entertainment, and family and national heritage all spring from engagement with the ghost and the monk-and are as vitally important to the making of Thai Buddhism as worshipping the Buddha himself.
What is included with this book?