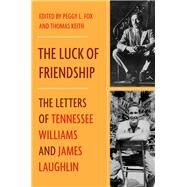 In December 1942, two guests at a Lincoln Kirstein mixer bonded over their shared love of Hart Cranes poetry. One of them was James Laughlin, the founder of a small publishing company called New Directions, which he had begun only seven years earlier as a sophomore at Harvard. The other was a young playwright named Thomas Lanier Williams, or "Tennessee," as he had just started to call himself. A little more than a week after that first encounter, Tennessee sent a letter to Jayas he always addressed Laughlin in writing expressing a desire to get together for an informal discussion of some of Tennessees poetry. "I promise you it would be extremely simple," he wrote, "and we would inevitably part on good terms even if you advised me to devote myself exclusively to the theatre for the rest of my life."So began a deep friendship that would last for forty-one years, through critical acclaim and rejection, commercial success and failure, manic highs, bouts of depression, and serious and not-so-serious liaisons. Williams called Laughlin his "literary conscience," and New Directions serves to this day as Williamss publisher, not only for The Glass Menagerie and his other celebrated plays but for his highly acclaimed novels, short stories, and volumes of poetry as well. Their story provides a window into the literary history of the mid-twentieth century and reveals the struggles of a great artist, supported in his endeavors by the publisher he considered a true friend.
What is included with this book?