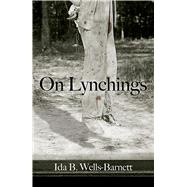 The bleak years after the Civil War brought continuing oppression to African Americans. During the 1880s and 1890s, more than 100 black citizens were lynched each year. In 1892, Memphis newspaper editor Ida B. Wells-Barnett raised a lone voice of protest and was forced to flee for her life. So began the civil rights pioneer's crusade against lynching.
This compilation features Southern Horrors, Wells's first pamphlet on the subject of lynching, as well as its successors, A Red Record and Mob Rule in New Orleans. Substantiated by her meticulous research and documentation, these works remain as important to today's historians as they were to the author's original audience.
An early leader of the civil rights movement, Ida B. Wells-Barnett (1862–1931) was an African American journalist, newspaper editor, suffragist, sociologist, and lecturer. She founded the National Association of Colored Women, the National Afro-American Council, and the first civic organization for African-American women, known today as the Ida B. Wells Club.
What is included with this book?