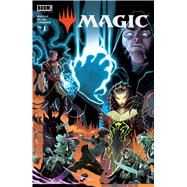 A coordinated assassination attempt will force a cabal of Planeswalkers to save not only their own lives, but the entire plane of Ravnica in this unique beginning for a pop culture phenomenon.

WHO IS BEHIND THE ATTACKS ON THREE OF RAVNICA'S PLANESWALKERS?

Across the vast Multiverse, those gifted with a “spark” can tap into the raw power of Magic and travel across realms – they are Planeswalkers, and they are being targeted. When coordinated assassination attempts on Guildmasters Ral Zarek, Vraska, and Kaya rock the city of Ravnica leaving Jace Beleren’s life hanging in the balance, a fuse is lit that threatens not just these three Guilds, but the entire plane of Ravnica. With tensions already high in the city as a comet slowly approaches, the cabal of Planeswalkers will race against time to discover who is behind the attacks, leading them to the only Planeswalker who survived through the Ice Age of Dominaria and discovering who and what lies entombed in the comet's icy core...

A unique beginning for the worldwide pop culture phenomenon starts here from Jed MacKay (Marvel’s Black Cat) and Ig Guara (Marvel’s Ghost-Spider), perfect for new readers and long time fans. Collects Magic: The Gathering #1-5.
a Halifax-based comic book writer known for his Marvel Comics work on such titles as EDGE OF SPIDER-GEDDON, INFINITY WARS: GHOST PANTHER, DAUGHTERS OF THE DRAGON and MAN WITHOUT FEAR.
What is included with this book?