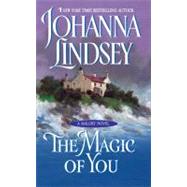 As wild and reckless as the most incorrigible of her male cousins, Amy Malory has reached a marriageable age and has set her sights on a most inappropriate mate: the straight-laced American ship captain who once nearly had her Uncle James hung for piracy.Warren Anderson is shocked by the brazen advances of his despised enemy's beautiful niece. Though determined to resist her, he burns for the enchanting British minx. And an impassioned heart implores him to surrender to a love that could stoke the smouldering fires of a family feud into a dangerous, all consuming blaze.
What is included with this book?

The Magic of You

The barmaid sighed and sighed again, because the three handsome gentlemen, all young lords by the look of them, had requested no more than drinks from her, despite her best efforts to offer them her favours as well. Still, she hovered near their table, hoping one of them might change his mind, especially the goldenhaired one with the sensual green eyes, eyes that promised untold delights if she could just get her hands on him. Derek, she′d heard him called, and her heart had fair tripped over when he′d walked through the door. She′d never seen a man so handsome - until the youngest of the trio followed him in.

It was a bleedin′ shame that one had to be so young, for her experience with boys his age was dismally unsatisfying. On the other hand, this young one had a devilishly wicked sparkle in his eyes that made her wonder if he might know how to pleasure a woman despite his tender years. Actually taller than his two older companions and broader of frame, with hair of a midnight hue and eyes of the clearest cobalt blue, he was so appealing that she′d be more than willing to find out.

The third member of their group, who looked to be the oldest, wasn′t nearly as handsome as his two friends, though, truth be known, he was a fine-looking specimen as well, just outdone by the two heart-stoppers. The girl sighed again, waiting, hoping, fairly drooling, but afraid she was bound to be disappointed tonight, with their interest on no more than their drinks and their own conversation.

Oblivious to the salacious thoughts coming their way - nothing new for these three-they suddenly changed the course of the amiable conversation at the table under such avid observation.

The two Malory cousins grinned at each other. What Percy didn′t know was that a bunch of pirates had taught Jeremy everything he knew about drink and women. But that wasn′t something that went beyond the family′s knowledge; nor the fact that Jeremy′s father, James Malory, Viscount of Ryding, had been the leader of those same pirates in the days when he was known as the Hawke. Percival Alden, or Percy, as his friends called him, would certainly never be told. Good old Percy couldn′t keep a secret to save his soul.

"My uncle James warned me to have his drinks watered down, don′t you know." Derek said the outright lie with a perfectly straight face. "Otherwise the young′un wouldn′t be allowed out with me."

"Gad, how awful!" Percy changed his tune, commiserating now that he was assured an eighteen-year-old wasn′t drinking him under the table.

Percy, at twenty-eight, was the oldest of the trio, after all. Stood to reason that he ought to be the one to hold his liquor better than either of his companions. ′Course, Derek, at twenty-five, had always been able to put him to shame when it came to serious drinking. But young Jeremy had been surpassing them both-or at least Percy had thought so. How utterly deplorable to have a reformed rake for a father who kept such close tabs on you, even enlisting the rest of the family to help curtail your fun.

Then again, Derek never said a word when Jeremy would disappear late of an evening with a comely wench on his arm, so not all of the boys fun was being curtailed. Come to think of it, Percy couldn′t remember a single time in the past year, since Derek had taken his young cousin under his wing, that Jeremy hadn′t -found a willing female with whom to occupy a few very private hours, whether the three young men had ended up in a lively tavern, in an expensive house of Eros, or at one of society′s many gatherings. The boy had the most devilish luck where women were concerned. Women of all ages, whores and ladies alike, found this youngest male Malory quite irresistible.

In that respect, he was taking after his father, James, and his uncle Anthony Malory. Those two Malory brothers, the younger of four, had set the town on fire in their day with the scandals their affairs had generated. Derek, the only son of the oldest Malory brother, was just as lucky with women for that matter, although much more discreet and discerning about whom he chose to favour, so that the few scandals he′d been embroiled in since he′d come of age hadn′t concerned women at all.

Having thought it over, Percy summoned the barmaid to him and whispered in her ear.

The two cousins, watching him, knew exactly what he was doing: ordering the next round and arranging, supposedly on the sly, to have the water left out of Jeremy′s drink. It was all the cousins could do not to burst out laughing. But Derek, noting the girl′s frown and that she was about to tell the young lord that none of the previous drinks she′d served had contained any water, had to quickly catch her eye to give her a nod and a wink so she′d know they were just having some sport and go along with it. She did, smart girl, grinning as she left.

Derek would have to see that the pretty miss was compensated, though not as she might like. She′d turned all of her ample charms on him when they′d first come in, but having another assignation already arranged for the wee hours , he hadn′t encouraged her.

This was a tavern they often frequented, but this girl was new. He′d try her eventually - they all would if she kept the job long enough - but not tonight, since they′d all scored right handily at the Shepfords′ annual Season-opening ball earlier in the evening.

The Magic of You. Copyright Â© by Johanna Lindsey . Reprinted by permission of HarperCollins Publishers, Inc. All rights reserved. Available now wherever books are sold.

Excerpted from The Magic of You by Johanna Lindsey
All rights reserved by the original copyright owners. Excerpts are provided for display purposes only and may not be reproduced, reprinted or distributed without the written permission of the publisher.