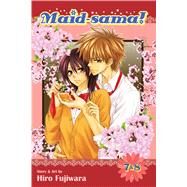 A 2-in-1 edition of the romantic-comedy series where a student council president secretly works at a maid café!

As if being student council president of a predominantly male high school isn’t hard enough, Misaki Ayuzawa has a major secret—she works at a maid café after school! How is she supposed to keep her image of being ultrasmart, strong and overachieving intact once school heartthrob Takumi Usui discovers her double life?!

Misaki secretly participates in the maid café’s eating contest to save a coworker from keeping a promise that she never should’ve made in the first place. Then things unexpectedly heat up when a game called Love Trial forces Misaki to participate in various festival games with Usui—while holding hands!
Hiro Fujiwara is from Hyogo Prefecture in Japan and was born on December 23. Maid-sama! (originally published as Kaichou wa Maid-sama! in Hakusensha’s LaLa magazine) is her first long-running manga series and is available in North America from VIZ Media.