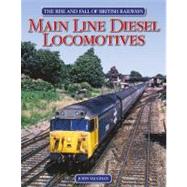 In a feast of railway nostalgia, this gloriously illustrated book celebrates the history of British-built main line diesel locomotives constructed between 1947 and 1993. Written by a respected railway author, it features locomotives from the whole of mainland Britain, with particular emphasis on the years from 1968, when steam ended on British Railways, to the arrival of the new generation of North American diesels at the end of the 1990s. The authoritative test is supported by a wealth of photographs spanning the period 1948 to 2008, mot of them published for the first time.

John Vaughan is a respected author and photographer who has written more than 40 railway books in the past four decades.