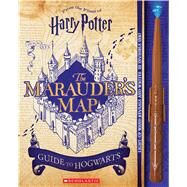 Don't miss this guide to Hogwarts that includes a wand-shaped invisible ink pen with UV light, fold-out pages of the Marauder's Map, and a parchment to make your own magical map!"I solemnly swear that I am up to no good."For years, Harry Potter film fans have marveled over the Marauder's Map, the enchanted map of Hogwarts that first appears in Harry Potter and the Prisoner of Azkaban. For the first time, readers can relive all the movie magic with this beautiful guidebook to the secrets of Hogwarts, complete with four foldout pages containing portions of the map. When fans are finished poring over the text, they can open up the wand, which doubles as an invisible ink marker and light. The light reveals invisible ink secrets on the foldout Marauder's Map pages, while the pen can help readers create their own magical map, using the blank parchment included at the back of this book. When all is said and done, this spellbinding guide is sure to have fans saying, "Mischief managed."
Erinn Pascal is a writer and editor from Pembroke Pines, FL. She lives in Jersey City with her boyfriend and their large assortment of Star Wars memorabilia.