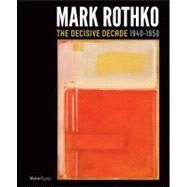 The Columbia Museum of Art is spearheading a national touring exhibition on the works of American artist Mark Rothko from the 1940s, drawn largely from the extensive collection at the National Gallery of Art in Washington, DC. This is the first exhibition and publication dedicated exclusively to the period--a decade crucial to our understanding of one of the most influential and important artists of the 20th century. In the 1940s Rothko's work underwent radical changes as he explored a range of styles rooted in expressionism, symbolism, and surrealism. The experimental spirit and unique mastery of his watercolours and gouaches from this period contributed greatly to the development of his contemporaneous canvases as he moved increasingly toward abstraction. Rothko's compositions at the end of the decade, which are often titled Multiforms, were marked by the translucent rectangles of colour within a chromaticfield that would become his signature style. This volume includes 75-80 full-colour illustrations, a timeline of the 1940s: Major Historical, Artistic, and Biographical Events, as well as a foreword by Christopher Rothko, an introduction by Todd Herman - former Chief Curator, Columbia Museum of Art, and director of the Arkansas Art Center - and 4 essays followed by a catalogue section with 48 entries
Todd Herman is the director of the Arkansas Arts Center. David Anfam is an independent scholar in London and the author of the Rothko catalogue raisonné of works on canvas. Modern and contemporary American art scholar Bradford R. Collins is the chair of the University of South Carolina’s art department. Harry Cooper is curator of modern and contemporary art at the National Gallery of Art, Washington, D.C. Ruth Fine is curator of special projects in modern art at the National Gallery of Art, Washington, D.C., and the author of the forthcoming catalogue raisonné of Rothko’s works on paper. The son of Mark Rothko, Christopher Rothko is a writer and psychologist.
What is included with this book?