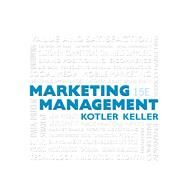 For undergraduate and graduate courses in marketing management.

Stay on the cutting-edge with the gold standard text that reflects the latest in marketing theory and practice.

The Fifteenth edition is fully integrated with MyMarketingLab and is updated where appropriate to provide the most comprehensive, current, and engaging marketing management text as possible.

MyMarketingLab is an online homework, tutorial, and assessment program designed to work with this text to engage students and improve results. Within its structured environment, students practice what they learn, test their understanding, and pursue a personalized study plan that helps them better absorb course material and understand difficult concepts.

Kevin Lane Keller is the E. B. Osborn Professor of Marketing at the Tuck School of Business at Dartmouth College. Professor Keller has degrees from Cornell, Carnegie-Mellon, and Duke universities. At Dartmouth, he teaches MBA courses on marketing management and strategic brand management and lectures in executive programs on those topics.

Professor Keller's general area of expertise lies in marketing strategy and planning and branding. His specific research interest is in how understanding theories and concepts related to consumer behavior can improve marketing strategies. His research has been published in three of the major marketing journals: the Journal of Marketing, the Journal of Marketing Research, and the Journal of Consumer Research. He also has served on the Editorial Review Boards of those journals. With more than 90 published papers, his research has been widely cited and has received numerous awards.

Actively involved with industry, he has worked on a host of different types of marketing projects. He has served as a consultant and advisor to marketers for some of the world’s most successful brands, including Accenture, American Express, Disney, Ford, Intel, Levi Strauss, Procter & Gamble, and Samsung. Additional brand consulting activities have been with other top companies such as Allstate, Beiersdorf (Nivea), BlueCross BlueShield, Campbell, Colgate, Eli Lilly, ExxonMobil, General Mills, GfK, Goodyear, Hasbro, Intuit, Johnson & Johnson, Kodak, L.L.Bean, Mayo Clinic, MTV, Nordstrom, Ocean Spray, Red Hat, SAB Miller, Shell Oil, Starbucks, Unilever, and Young & Rubicam. He has also served as an academic trustee for the Marketing Science Institute and is serving as their Executive Director from July 1, 2013, to July 1, 2015.

A popular and highly sought-after speaker, he has made speeches and conducted marketing seminars to top executives in a variety of forums. Some of his senior management and marketing training clients have included include such diverse business organizations as Cisco, Coca-Cola, Deutsche Telekom, ExxonMobil, GE, Google, IBM, Macy’s, Microsoft, Nestle, Novartis, Pepsico, SC Johnson and Wyeth. He has lectured all over the world, from Seoul to Johannesburg, from Sydney to Stockholm, and from Sao Paulo to Mumbai. He has served as keynote speaker at conferences with hundreds to thousands of participants.

Professor Keller is currently conducting a variety of studies that address strategies to build, measure, and manage brand equity. His textbook on those subjects, Strategic Brand Management, in its fourth edition, has been adopted at top business schools and leading firms around the world and has been heralded as the “bible of branding.”

An avid sports, music, and film enthusiast, in his so-called spare time, he has helped to manage and market, as well as serve as executive producer for, one of Australia’s great rock-and-roll treasures, The Church, as well as American power-pop legends Tommy Keene and Dwight Twilley. He also serves on the Board of Directors for The Doug Flutie, Jr. Foundation for Autism, the Lebanon Opera House, and the Montshire Museum of Science. Professor Keller lives in Etna, NH, with his wife, Punam (also a Tuck marketing professor), and his two daughters, Carolyn and Allison.

Part 8. Managing the Marketing Organization
23. Conducting Marketing Responsibly for Long-Term Success
What is included with this book?