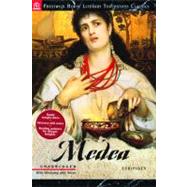 To make Medea more accessible for the modern reader, our Prestwick House Literary Touchstone Edition includes a glossary of the more difficult words, as well as convenient sidebar notes to enlighten the reader on aspects that may be confusing or overlooked. In doing this, it is our intention that the reader may more fully enjoy the beauty of the verse, the wisdom of the insights, and the impact of the drama.Witch, barbarian, foreigner, or a woman wronged and committed to the most horrific kind of justice, Medea is a heroine who makes her audience shudder. Euripides shows us an astonishingly strong female protagonist, whom some readers have identified as the first feminist in Western literature. Seeing where her strength leads her, though, we must wonder if she was intended to be portrayed a model or as a warning.Because the three other plays that were traditionally performed with Medea have been lost, it is difficult to say whether Euripides? Athenian audience was as upset by the play as modern readers are. It won only third place at the biggest festival in the city, indicating that ancient audiences also found it controversial. With its still-relevant examination of marriage, love, and revenge, and its explicit scenes of mental and emotional agony, Medea continues to demand our attention.
What is included with this book?