The Mermaid in the Bathtub 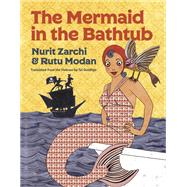 The Mermaid in the Bathtub is a charming, gorgeously retro retelling of Hans Christian Andersen’s classic story “The Little Mermaid,” by beloved Israeli author and illustrator duo Nurit Zarchi and Rutu Modan.

One day, a resolutely ordinary young man named Mr. Whatwilltheysay returns home to find Grain-of-Sand, a mermaid, waiting for him in his favorite armchair. Despite his objections, the two embark on a series of very watery adventures as he tries to get rid of her. But ultimately the thought of being seen with half a fish is simply too much for Mr. Whatwilltheysay to bear—what would people say? So broken-hearted Grain-of-Sand returns to the sea in his bathtub, leaving Mr. Whatwilltheysay to resume his pedestrian existence. Mr. Whatwilltheysay soon finds that his beloved landlubber life, however, lacks the splash and shimmer (and bathtub) of his good times with Grain-of-Sand—and acting against all his instincts, he sets off to sea to find her.
Nurit Zarchi is an Israeli poet and author of books for adults and children. Zarchi has published many poems in children’s magazines and more than one hundred works including children’s books, poetry, prose, and research. Zarchi has received major Israeli awards, including the Bialik Prize and the Ze'ev Prize (four times), and she was twice the winner of the Prime Minister’s Prize for her literary work.

Rutu Modan is an Israeli illustrator and comic book artist. She is a graduate of the Bezalel Academy of Art and Design in Jerusalem and former editor of the Hebrew edition of MAD Magazine. She received a Will Eisner Comic Industry Award for her book Exit Wounds in 2008.

Tal Goldfajnis an Assistant Professor of Hispanic Linguisticsat the University of Massachusetts, Amherst. She holds a PhD in General Linguistics from the University of Oxford. She is the author of, among others books, Word Order and Time in Biblical Hebrew Narrative (Oxford University Press) and a co-editor of a special issue on Translation and History in Latin America published by the Estudios Interdisciplinarios de América Latina y el Caribe (Tel Aviv University). Her translations of plays by Nelson Rodrigues (from Brazilian Portuguese) and Sergi Belbel (from Spanish and Catalan) have been published by Asia Publishers and staged in Tel Aviv.