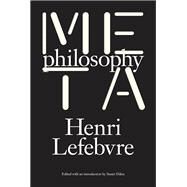 Leading French thinker with his key work on philosophical thought

In Metaphilosophy, Henri Lefebvre works through the implications of Marx’s revolutionary thought to consider philosophy’s engagement with the world. Lefebvre takes Marx’s notion of the “world becoming philosophical and philosophy becoming worldly” as a leitmotif, examining the relation between Hegelian–Marxist supersession and Nietzschean overcoming. Metaphilosophy is conceived of as a transformation of philosophy, developing it into a programme of radical worldwide change. The book demonstrates Lefebvre’s threefold debt to Hegel, Marx and Nietzsche, but it also brings a number of other figures into the conversation, including Sartre, Heidegger and Axelos. A key text in Lefebvre’s oeuvre, Metaphilosophy is also a milestone in contemporary thinking about philosophy’s relation to the world.
Henri Lefebvre (1901–91), former resistance fighter and professor of sociology at Strasbourg and Nanterre, was a member of the French Communist Party from 1928 until his expulsion in 1957. He was the author of sixty books on philosophy, sociology, politics, architecture and urbanism.

Stuart Elden is Professor of Political Theory and Geography at University of Warwick. He has co-edited and/or co-translated three previous volumes of Lefebvre's work, and is author of books including The Birth of Territory (University of Chicago Press, 2013).
What is included with this book?