Miami and the Siege of Chicago 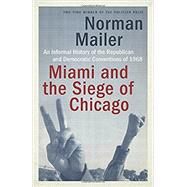 In this landmark work of journalism, Norman Mailer reports on the presidential conventions of 1968, the turbulent year from which today’s bitterly divided country arose. The Vietnam War was raging; Martin Luther King, Jr., and Robert F. Kennedy had just been assassinated. In August, the Republican Party met in Miami and picked Richard Nixon as its candidate, to little fanfare. But when the Democrats backed Lyndon Johnson’s ineffectual vice president, Hubert Humphrey, the city of Chicago erupted. Antiwar protesters filled the streets and the police ran amok, beating and arresting demonstrators and delegates alike, all broadcast on live television—and captured in these pages by one of America’s fiercest intellects.

Praise for Miami and the Siege of Chicago

“For historians who wish for the presence of a world-class literary witness at crucial moments in history, Mailer in Miami and Chicago was heaven-sent.”—Michael Beschloss, The Washington Post

“Extraordinary . . . Mailer [predicted that] ‘we will be fighting for forty years.’ He got that right, among many other things.”—Christopher Hitchens, The Atlantic

“[A] masterful account . . . To understand 1968, you must read Mailer.”—Chicago Tribune
Born in 1923 in Long Branch, New Jersey, and raised in Brooklyn, New York, Norman Mailer was one of the most influential writers of the second half of the twentieth century and a leading public intellectual for nearly sixty years. He is the author of more than thirty books. The Castle in the Forest, his last novel, was his eleventh New York Times bestseller. His first novel, The Naked and the Dead, has never gone out of print. His 1968 nonfiction narrative, The Armies of the Night, won the Pulitzer Prize and the National Book Award. He won a second Pulitzer for The Executioner’s Song and is the only person to date to have won Pulitzers in both fiction and nonfiction. Five of his books were nominated for National Book Awards, and he won a lifetime achievement award from the National Book Foundation in 2005. Norman Mailer died in 2007 in New York City.