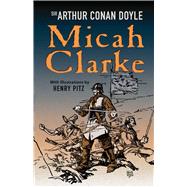 This exciting historical romance by the creator of Sherlock Holmes unfolds during the ill-fated Monmouth Rebellion of 1685, in which Protestant dissenters attempted to overthrow their Catholic monarch. Young Micah Clarke ventures off to join the rebels, falling in with a veteran soldier of fortune, and the pair weather a harrowing series of battles, recounted by Sir Arthur Conan Doyle with his customary wit and élan.
Micah Clarke offers a vivid portrait of the political situation in England during the rebellion, when countrymen took to arms against one another. The novel traces the youthful hero's eventful path across southern England to join Monmouth's army, marked by an encounter with smugglers, imprisonment in a dungeon, and pursuit by a pack of savage hounds. The final struggle pits the King's highly disciplined troops against Monmouth's ragged peasant forces, poor in weapons and training but stoutly armed with their religious faith. In addition to his richly evoked atmosphere of 17th-century life, finely drawn characters, and stirring battle scenes, Doyle presents thoughtful and respectful views of both sides of the conflict and makes an earnest case for religious tolerance.
Arthur Conan Doyle was a prolific writer born in Scotland who started out as a medical doctor. While at the University of Edinburgh, he augmented his income by writing stories. His first Sherlock Holmes tale was published in 1887, introducing one of literature's best-loved detectives. Doyle has also written many works of history and science fiction, plus plays and poetry.

I. Of Cornet Joseph Clarke of the Ironsides
II. Of My Going to School and of My Coming Thence
III. Of Two Friends of My Youth
IV. Of the Strange Fish that we Caught at Spithead
V. Of the Man with the Drooping Lids
VI. Of the Letter that Came from the Lowlands
VII. Of the Horseman who Rode from the West
VIII. Of our Start for the Wars
IX. Of a Passage of Arms at the Blue Boar
X. Of our Perilous Adventure on the Plain
XI. Of the Lonely Man and the Gold Chest
XII. Of certain Passages upon the Moor
XIII. Of Sir Gervas Jerome, Knight Banneret of the County of Surrey
XIV. Of the Stiff-legged Parson and his Flock
XV. Of our Brush with the King’s Dragoons
XVI. Of our Coming to Taunton
XVII. Of the Gathering in the Market-Square
XVIII. Of Master Stephen Timewell, Mayor of Taunton
XIX. Of a Brawl in the Night
XX. Of the Muster of the Men of the West
XXI. Of my Hand-grips with the Brandenburger
XXII. Of the News from Havant
XXIII. Of the Snare on the Weston Road
XXIV. Of the Welcome that Met Me at Badminton
XXV. Of Strange Doings in the Boteler Dungeon
XXVI. Of the Strife in the Council
XXVII. Of the Affair near Keynsham Bridge
XXVIII. Of the Fight in Wells Cathedral
XXIX. Of the Great Cry from the Lonely House
XXX. Of the Swordsman with the Brown Jacket
XXXI. Of the Maid of the Marsh and the Bubble which Rose from the Bog
XXXII. Of the Onfall at Sedgemoor
XXXIII. Of my Perilous Adventure at the Mill
XXXIV. Of the Coming of Solomon Sprent
XXXV. Of the Devil in Wig and Gown
XXXVI. Of the End of it All