Micromegas and Other Short Fictions 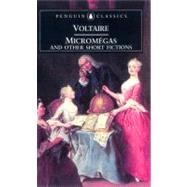 Somewhere between tales and polemics, these funny, ribald, and inventive pieces show Voltaire doing what he does best: brilliantly challenging received wisdom, religious intolerance, and naïve optimism. Traveling through strange environments, Voltaire's protagonists are educated, often by surprise, into the complexities and contradictions of their world. Arriving on Earth from the star Sirius, the gigantic explorer Micromégas discovers a diminutive people with an inflated idea of their own importance in the universe. Babouc in "The World as It Is" learns that humanity is equally capable of barbarism and remarkable altruism. Other characters include a little-known god of infidelity, a pretentious graduate who invites a savage to dinner, and an Indian fakir who puts up with a bed of nails to gain the adoration of his female disciples. These "fables of reason" challenge the assumptions of reader and protagonist alike.
Fran&ccedilois Marie Arouet. who took the name Voltaire (1694-1778), was the universal genius of the Enlightenment. In his early career, he was briefly committed to the Bastille and later exiled to England. His most characteristic works are philosophical tales, of which Candide (1759) is the most famous.
What is included with this book?