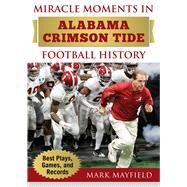 Alabama’s Crimson Tide has been the most dominant college football team in America for the past decade, winning five national championships and five conference titles. The team, under coach Nick Saban, has won an astounding ninety percent of its games since 2008, and established a dynasty unparalleled in modern college football.

As impressive as Saban and his teams have been, these are far from the only glory days in Alabama football history, and their great tradition is celebrated in Miracle Moments in Alabama Crimson Tide Football History.

Mark Mayfield chronicles Alabama’s colorful football history dating to when their first team won a scrimmage, 56–0, over a group of Birmingham high school players in 1892. Three decades later, Alabama pulled off a stunning 20–19 upset of West Coast powerhouse Washington in the 1926 Rose Bowl, won its first national championship, and took its place among the elite teams in America with seventeen national titles through eras coached by Wallace Wade, Frank Thomas, the legendary Paul “Bear” Bryant, Gene Stallings, and Saban.
Mark Mayfield is the author of Back on Top! The Alabama Crimson Tide’s 2015-16 Championship Football Season, co-author of Crimson Domination: The Process Behind Alabama’s 15th National Championship and author of The Spaceflight Vault: A History of NASA’s Manned Missions. He currently serves as editorial adviser to student media, and adjunct professor of journalism and creative media at The University of Alabama. Mayfield is also a former editor-in-chief of House Beautiful, Traditional Home, and Art & Antiques magazines and, early in his career, spent ten years as a reporter for USA Today. A married father of four, he lives in Tuscaloosa.