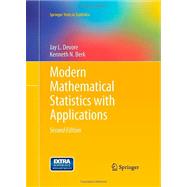 Many mathematical statistics texts are heavily oriented toward a rigorous mathematical development of probability and statistics, without much attention paid to how statistics is actually used.. In contrast, Modern Mathematical Statistics with Applications, Second Edition strikes a balance between mathematical foundations and statistical practice. In keeping with the recommendation that every math student should study statistics and probability with an emphasis on data analysis, accomplished authors Jay Devore and Kenneth Berk make statistical concepts and methods clear and relevant through careful explanations and a broad range of applications involving real data. The main focus of the book is on presenting and illustrating methods of inferential statistics that are useful in research. It begins with a chapter on descriptive statistics that immediately exposes the reader to real data. The next six chapters develop the probability material that bridges the gap between descriptive and inferential statistics. Point estimation, inferences based on statistical intervals, and hypothesis testing are then introduced in the next three chapters. The remainder of the book explores the use of this methodology in a variety of more complex settings. This edition includes a plethora of new exercises, a number of which are similar to what would be encountered on the actuarial exams that cover probability and statistics. Representative applications include investigating whether the average tip percentage in a particular restaurant exceeds the standard 15%, considering whether the flavor and aroma of Champagne are affected by bottle temperature or type of pour, modeling the relationship between college graduation rate and average SAT score, and assessing the likelihood of O-ring failure in space shuttle launches as related to launch temperature.
What is included with this book?