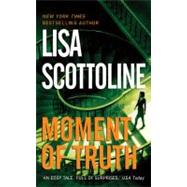 When Philadelphia estates attorney Jack Newlin walks in the door and sees his wife's lifeless body on the floor, he doesn't hesitate for a minute. He walks over and picks up the bloodied knife. Jack believes without a doubt that his wife's killer is his daughter. So he goes to the phone, calls the cops, and confesses to a crime he didn't commit.
Moment of Truth

Jack Newlin had no choice but to frame himself for murder. Once he had set his course, his only fear was that he wouldn't get away with it. That he wasn't a good enough liar, even for a lawyer.

The detectives led Jack in handcuffs into a small, windowless room at the Roundhouse, Philadelphia's police administration building. Bolted to the floor at the center of the room was a straight-backed steel chair, which reminded Jack of the electric chair. He looked away.

The walls of the room were a dingy gray and marred by scuff marks as high as wainscoting. A typewriter table topped with a black Smith-Corona stood against the side wall, and in front of the table sat two old wooden chairs. One of the chairs groaned when the heavyset detective, who had introduced himself as Stan Kovich, seated himself and planted his feet wide. "Siddown, Mr. Newlin," Detective Kovich said, gesturing to a wooden chair across from him.

"Thank you." Jack took a seat, noting that the detective had bypassed the steel chair, evidently reserved for murderers who weren't wealthy. Special treatment never suited Jack. A bookkeeper's son, he had worked his way through school to become an estates lawyer who earned seven figures, but even his large partnership draw remained a pittancein comparison to his wife's family money. He had always wished the Buxton money away, but now he was glad of it. Money was always a credible motive for murder.

"You want a soda? A Coke or somethin'?" Kovich asked. The detective wore a short-sleeved white shirt, light for wintertime, and his bullish neck spread his collar open. His shoulders hunched, powerful but gone to fat, and khaki-colored Sansabelts strained to cover his thighs. A bumpy, working-class nose dominated his face and he had cheekbones so fleshy they pressed against the rims of his glasses, large gold-rimmed aviators. Their bifocal windows magnified his eyes, which were earth brown and addressed Jack without apparent judgment.

"No, thanks. Nothing to drink." Jack made deliberate eye contact with Detective Kovich, who was closer and seemed friendlier than the other detective. Propped against the wall on a thin Italian loafer, he was black and hadn't said anything except to introduce himself. Hovering over six feet tall, rangy and slim, the detective had a face as narrow as his body, a small, thin mouth, and a nose a shade too long in proportion to high cheekbones. Dark, almost-onyx eyes sat high on his face, like judges atop a dais.

Let's start by you telling me something about yourself, Mr. Newlin." Kovich smiled, showing teeth stained by coffee. "By the way, just for the record, this interview is being videotaped." He waved vaguely behind the smudgy mirror on the wall, but Jack didn't look, steeling himself to be convincing in his false confession.

"Well, I'm forty-three. I'm a partner at Tribe & Wright, heading the estates and trusts department. I attended the University of Pennsylvania Law School, Yale, and Girard before that."

"Thank you," Jack said. He was proudest of Girard, a boarding high school established by the trust of Stephen Girard for fatherless boys. Girard was a Philadelphia institution. He never could have made it to Yale or any other university otherwise.

"Your people still up there?"

"No. My father died a long time ago and my mother passed away last year, from lung cancer."

"I know how that goes. I lost my mother two years ago. It's no picnic."

"I'm sorry," Jack said. No picnic. It was such a rich understatement, his mouth felt bitter. His mother, gone. His father, so long ago. Now honor. He cleared his throat. "Maybe we should move on."

"Sure, sure." Kovich nodded quickly. "So, you're a lawyer at the Tribe law firm. Pretty big outfit, right? I read somethin' about them in the paper, how much they bring in a year. They're printin' money?"

"Don't believe everything you read. Reporters have to sell newspapers. "

"Tell me about it." Kovich laughed, a harsh guttural noise that burst from his throat. He turned to the other detective, still standing against the wall. "Right, Mick?" he asked.

The detective, who had introduced himself as Reginald Brinkley, not Mick, only nodded in response, and the pursing of his lips told Jack he didn't welcome the attention. Brinkley, also middle-aged, wore a well tailored brown sport coat with a maroon silk tie, still tight despite the late hour and affixed to his white shirt with a gold-toned tie bar. His gazechilled the room and the uptilt to his chin was distinctly resentful. Jack didn't know what he had done to provoke the detective and only hoped it worked against him.

"You got any other family, Jack? Kids?"

"I got a sixteen-year-old!" Kovich grinned, showing his bad teeth. "It's" a trip, ain't it? Teenagers. You got just the one?"

"Me, I got a thirteen-year-old, too. Also a girl. Houseful of blow dryers. My wife says when they're not in the bathroom, they're in the chat rooms. Yours like that, on the computer?"

Jack cleared his throat again. "I don't mean to be impolite, but is there a reason for this small talk?" He didn't want to go there and it seemed like something a murderer would say.

He tensed up. He should have thought of that. The police would be the ones to tell Paige. "My daughter lives on her own. I'd hate for her to hear this kind of news from the police. Can't I tell her myself?"

Moment of Truth. Copyright © by Lisa Scottoline. Reprinted by permission of HarperCollins Publishers, Inc. All rights reserved. Available now wherever books are sold.

Excerpted from Moment of Truth by Lisa Scottoline
All rights reserved by the original copyright owners. Excerpts are provided for display purposes only and may not be reproduced, reprinted or distributed without the written permission of the publisher.