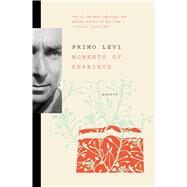 In this collection of essays based on his time as a Jewish prisoner in the Nazi camps, Primo Levi creates a series of sketches of the people he met who retained their humanity even in the most inhumane circumstances.

Having already written two memoirs of his survival at Auschwitz, Levi knew there was still more left untold. Collected in this book are stray vignettes of fifteen individuals Levi met during his imprisonment. Whether it was the young Romani man who smuggled a creased photo of his bride past the camp guards or the starving prisoner who still insisted on fasting on Yom Kippur, the memory of these individuals stayed with Levi for long after.

They represent for him “bizarre, marginal moments of reprieve.” Neither simple heroes nor victims, but people who never lost sight of their humanity in the face of unimaginable suffering. Written with the author’s signature humility and intelligence, Moments of Reprieve shines with lyricism and insight. Nearly forty years after their publication, Levi’s words remain as beautiful as they are necessary.

Along with Elie Wiesel and Hannah Arendt, Primo Levi is remembered as one of the most powerful and perceptive writers on the Holocaust and the Jewish experience during World War II. This is an essential book both for students and literary readers. Reading Primo Levi is a lesson in the resiliency of the human spirit.
Born to a Jewish family in Turin in 1919, Primo Levi was trained as a chemist. During World War II, he was arrested as a member of a partisan group and deported to Auschwitz. After the camp’s liberation, he returned to Italy and worked as a chemist, writing only on the side. His first book Survival at Auschwitz was a personal account of his year at the camps. The follow-up memoir The Reawakening cemented Levi as a leading authority on the Holocaust. Other books by Levi include Periodic Table, If Not Now, When?, The Monkey’s Wrench, Other People’s Trades, The Drowned and the Saved, and more. Primo Levi died in 1987 after falling down his apartment’s stairway. Biographers remain divided as to whether his fall was a suicide or an accident.
What is included with this book?