Montesquieu: The Spirit of the Laws 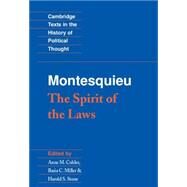 The Spirit of the Laws is, without question, one of the central texts in the history of eighteenth-century thought, yet there has been no complete, scholarly English-language edition since that of Thomas Nugent, published in 1750. This lucid translation renders Montesquieu's problematic text newly accessible to a fresh generation of students, helping them to understand quite why Montesquieu was such an important figure in the early enlightenment and why The Spirit of the Laws was, for example, such an influence upon those who framed the American constitution. Fully annotated, this edition should focus attention upon Montesquieu's use of sources and his text as a whole, rather than upon those opening passages towards which critical energies have traditionally been devoted, and a select bibliography and chronology are provided for those coming to Montesquieu's work for the first time.
What is included with this book?