Moral Reflections on Foreign Policy in a Religious War 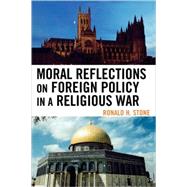 Moral Reflections on Foreign Policy in a Religious War argues that foreign policy thinkers and actors must take religion more seriously than they have in analysis and action. The tragedy of U.S. policy in Iraq is in part due to the dangers of ignoring religious conflicts in that country until it was too late, and then responding too awkwardly. Working as a philosopher of religion and politics, Ronald H. Stone shows how unreflective religion in a dialogic relationship with power politics has proven hazardous in both the United States and the Middle East. Stone proposes policy changes for the United States and calls for reform in the ways that both politics and religion are understood. Moral Reflections on Foreign Policy in a Religious War is a book appropriate for all levels of students and anyone seeking to make sense of current events. Book jacket.
Ronald H. Stone is coeditor of Resistance and Theological Ethics, (Rowman & Littlefield, 2004)
What is included with this book?