The Most Dangerous Branch The Judicial Assault on American Culture 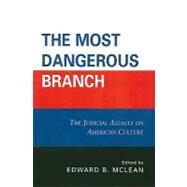 "Over the years the Supreme Court of the United States, and other courts, have been subjects of controversy, disagreement, praise, and condemnation. Many of the expressed misgivings regarding the expansion of judicial power have been born out by the decisions reflected not only in the verdicts of the Supreme Court of the United States, but also in other judicial forums of American society. The effect of these decisions has resulted in an attack on the American civil society that compels the nation to follow courses of development that, were they to be legitimate, would have emanated from the political institutions of the country, not from the legal institutions." "The Most Dangerous Branch is a collection of essays that provide support for these contentions and hope to prompt citizens to demand greater responsibility by the courts and their adherence to their proper role in a system under the rule of law."--BOOK JACKET.
What is included with this book?