The Mountains We Have Crossed 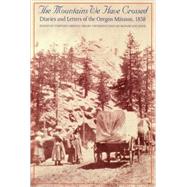 Four newlywed couples, along with one single man, were sent to Oregon in 1838 to reinforce the two-year-old mission established by Marcus Whitman and Henry Spalding. These reinforcements were to become legendary in the history of the Pacific Northwest for the incessant bickering and petty jealousies that eventually caused the deaths of Marcus and Narcissa Whitman and forced the abandonment of the mission effort. Uncertainty and conflict as well as willpower and endurance mark the story of the Oregon Mission and its charismatic, though contentious, missionaries. Simply getting to Oregon in the 1830s was a feat. Once they arrived, their efforts were doomed by their inability to agree on strategies for converting the Nez Perce and Spokane Indians. This Bison Books edition contains the very personal diary of Sarah Smith, "the weeping one" as the Indians remembered her. When read in chronological sequence with the nearly one hundred letters written by her husband, Asa, a compelling picture of their journey to Oregon and subsequent life at the mission emerges. Other letters, documents, and biographical sketches enhance the volume.
Clifford M. Drury, clergyman and historian, edited the letters and diaries of the Oregon missionaries in Where Wagons Could Go and On to Oregon (both available in Bison Books editions).

Bonnie Sue Lewis writes of the timeless value of these documents in her introduction. She is an assistant professor of missiology at the University of Dubuque Theological Seminary.