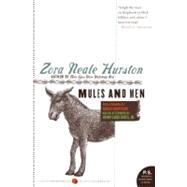 Mules and Men is a treasury of black America's folklore as collected by a famous storyteller and anthropologist who grew up hearing the songs and sermons, sayings and tall tales that have formed an oral history of the South since the time of slavery. Returning to her hometown of Eatonville, Florida, to gather material, Zora Neale Hurston recalls "a hilarious night with a pinch of everything social mixed with the storytelling." Set intimately within the social context of black life, the stories, "big old lies," songs, Vodou customs, and superstitions recorded in these pages capture the imagination and bring back to life the humor and wisdom that is the unique heritage of African Americans.
What is included with this book?

As I crossed the Maitland-Eatonville township line I could see a group on the store porch. I was delighted. The town had not changed. Same love of talk and song. So I drove on down there before I stopped. Yes, there was George Thomas, Calvin Daniels, Jack and Charlie Jones, Gene Brazzle, B. Moseley and "Seaboard." Deep in a game of Florida-flip. All of those who were not actually playing were giving advice--"bet straightening" they call it.

"Hello, boys," I hailed them as I went into neutral.

They looked up from the game and for a moment it looked as if they had forgotten me. Then B. Moseley said, "Well, if it ain't Zora Hurston!" Then everybody crowded around the car to help greet me.

"Where you gointer stay, Zora?"

"With Mett and Ellis, I reckon."

"Mett" was Mrs. Armetta Jones, an intimate friend of mine since childhood and Ellis was her husband. Their house stands under the huge camphor tree on the front street.

"Hello, heart-string," Mayor Hiram Lester yelled as he hurried up the street. "We heard all about you up North. You back home for good, I hope."

"Nope, Ah come to collect some old stories and tales and Ah know y'all know a plenty of 'em and that's why Ah headed straight for home."

"What you mean, Zora, them big old lies we tell when we're jus' sittin' around here on the store porch doin' nothin'?" asked B. Moseley.

"Yeah, those same ones about Ole Massa, and colored folks in heaven, and--oh, y'all know the kind I mean."

"Plenty of people, George. They are a lot more valuable than you might think. We want to set them down before it's too late."

"Too late for what?"

"Before everybody forgets all of 'em."

"No danger of that. That's all some people is good for-set 'round and lie and murder groceries."

"Wait till she get out her car, Calvin. Let her get settled at 'Met's' and cook a pan of ginger bread then we'll all go down and tell lies and eat ginger bread. Dat's de way to do. She's tired now from all dat drivin'."

"All right, boys," I agreed. "But Ah'll be rested by night. Be lookin' for everybody."

So I unloaded the car and crowded it into Ellis' garage and got settled. Armetta made me lie down and rest while she cooked a big pan of ginger bread for the company we expected.

Calvin Daniels and James Moseley were the first to show up.

"Calvin, Ah sure am glad that you got here. Ah'm crazy to hear about John and dat frog," I said.

"That's why Ah come so early so Ah could tell it to you and go. Ah got to go over to Wood Bridge a little later on."

"Ah always like to be good as my word, and Ah just heard about a toe-party over to Wood Bridge tonight and Ah decided to make it."

"A toe-party! What on earth is that?"

"Come go with me and James and you'll see!"

"But, everybody will be here lookin' for me. They'll think Ah'm crazy--tellin' them to come and then gettin' out and goin' to Wood Bridge myself. But Ah certainly would like to go to that toe-party."

"Aw, come on. They kin come back another night. You gointer like this party."

"Well, you tell me the story first, and by that time, Ah'll know what to do."

James motioned to his friend. "Hurry up and tell it, Calvin, so we kin go before somebody else come."

"Aw, most of 'em ain't comin' nohow. They all 'bout goin' to Wood Bridge, too. Lemme tell you 'bout John and dis frog:

It was night and Ole Massa sent John,' his favorite slave, down to the spring to get him a cool drink of water. He called John to him.

"John, I'm thirsty. Ah wants a cool drink of water, and Ah wants you to go down to de spring and dip me up a nice cool pitcher of water."

John didn't like to be sent nowhere at night, but he always tried to do everything Ole Massa told him to do, so he said, "Yessuh, Massa, Ah'll go git you some!"

John took de pitcher and went on down to de spring.

There was a great big ole bull frog settin' right on de edge of de spring, and when John dipped up de water de noise skeered de frog and he hollered and jumped over in de spring.

John dropped de water pitcher and tore out for de big house, hollerin' "Massa! Massa! A big ole booger done got after me!"

Ole Massa told him, "Why, John, there's no such thing as a booger."

"No, indeed, Massa, you and nobody else can't send me back there so dat booger kin git me."

Mules and Men. Copyright © by Zora Hurston. Reprinted by permission of HarperCollins Publishers, Inc. All rights reserved. Available now wherever books are sold.

Excerpted from Mules and Men by Zora Neale Hurston
All rights reserved by the original copyright owners. Excerpts are provided for display purposes only and may not be reproduced, reprinted or distributed without the written permission of the publisher.