The Mummy! A Victorian Tale of the 22nd Century 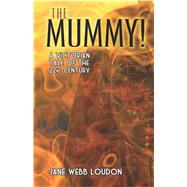 Within a decade of the 1818 publication of Mary Shelley's Frankenstein, another Englishwoman invented a foundational work of science fiction. Seventeen-year-old Jane Webb Loudon took up the theme of reanimation, moved it three hundred years into the future, and applied it to Cheops, an ancient Egyptian mummy. Unlike Shelley's horrifying, death-dealing monster, this revivified creature bears the wisdom of the ages and is eager to share his insights with humanity. Cheops boards a hot-air balloon and travels to 22nd-century England, where he sets about remedying the ills of a corrupt government.
In recounting Cheops' attempts to put the futuristic society to rights, the young author offers a fascinating portrait of the preoccupations of her own era as well as some remarkably prescient predictions of technological advances. The Mummy! envisions a world in which automatons perform surgery, undersea tunnels connect England and Ireland, weather-control devices provide crop irrigation, and messages are transmitted with the speed of cannonball fire. The first novel to feature the concept of a living mummy, this pioneering tale offers an engaging mix of comedy, politics, and science fiction.
Jane Webb Loudon (1807–58) was a leading horticulturist of her day and well known for her books on gardening. One of the first women to assay the genre later known as science fiction, she anonymously published her first work of fiction, The Mummy!, in 1827. A reviewer, John Loudon, was sufficiently impressed to seek out the author, and the two were subsequently married.