The Murder on the Links A Hercule Poirot Mystery 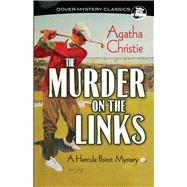 "Here is a remarkably good detective story." — The New York Times Book Review
"For God's sake, come!" implores the letter to Hercule Poirot from Paul Renauld. A wealthy English financier living in France, Renauld hints at being in possession of a deadly secret. The Belgian sleuth — accompanied by Captain Hastings, his friend from The Mysterious Affair at Styles — rushes to answer the call but arrives too late. Stabbed in the back, Poirot's would-be client lies in a shallow grave on the golf course alongside his estate.
Renauld's wife, found bound and gagged in her bedroom, identifies a pair of masked intruders as the likeliest culprits. But the thugs prove untraceable even as the roster of suspects expands. The instant dislike formed between Poirot and Monsieur Giraud of the Paris Sûreté further intensifies the investigation, which becomes a competition between their radically different approaches to crime detection. Both are incapable of solving the murder until the discovery of a second corpse, slain in the same manner as the first, provides fresh clues. Agatha Christie's lively and stylish whodunit offers mystery lovers an abundance of twists and turns as well as a dash of romance.
Agatha Christie (1890–1976) is the bestselling novelist in history; only the Bible and the works of Shakespeare are more frequently purchased than her mysteries, which have sold more than a billion copies in English and another billion in 100 foreign languages. Her play, The Mousetrap, opened in London in 1952 and has run continuously ever since.
Contents