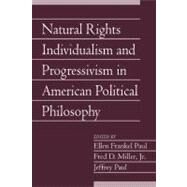 The essays in this collection investigate two political traditions and their critical interactions. The first series of essays deals with the development of natural rights individualism, some examining its origins in the thought of the seminal political theorist, John Locke, and the influential constitutional theorist, Montesquieu, others the impact of their theories on intellectual leaders during the American Revolution and the Founding era, and still others the culmination of this tradition in the writings of nineteenth-century individualists such as Lysander Spooner. The second series of essays focuses on the Progressive repudiation of natural rights individualism and its far-reaching effect on American politics and public policy.
What is included with this book?